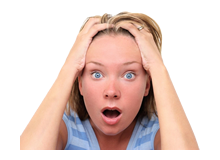 WARNING: The mental picture you get from reading this woman’s story is absolutely hilarious.

My night began as any other normal weekday night. I came home from work, fixed dinner for my son and we played for a while. I then had the thought that would ring painfully in my mind for the next couple hours: maybe I should use that wax in my medicine cabinet. I set up my boy with a video and head to the site of my demise, um, I mean bathroom. It was one of those cold wax kits.

No melting a clump of hot wax, you just rub the clear strips in your hand, peel them apart, press it on your leg (or wherever) and ignore the frantically rising crescendo of string instruments in the background. No muss, no fuss. How hard can this be? I mean, I’m not the girly-est of girls but I’m mechanically inclined so maybe I can figure out how this works……………………..You’d think.

So I pull one of the thin strips out. It’s two strips facing each other, stuck together. I’m supposed to rub it in my hand to warm and soften the wax (I’m guessing). I go one better: I pull out the hair dryer and heat the SOB to ten thousand degrees. Cold wax, my ass.

(Oh, how that phrase will come back to haunt me.) I lay the strip across my thigh. I hold the skin around it and pull. OK, so it wasn’t the best feeling in the world, but it wasn’t bad. I can do this! Hair removal no longer eludes me!

I am Sheera, fighter of all wayward body hair and smooth skin extraordinaire!

With my next wax strip, I move north. After checking on the boy and verifying that he was, in fact, becoming one with Bear and learning all about smells, I sneak into the bathroom for The Ultimate Hair Fighting Championship. I drop my panties and place one foot on the toilet. Using the same procedure, I then apply the wax strip across the right side on my bikini line, covering the right half of my vagina and stretching up into the inside of the right ass cheek. (Yeah,it was a long strip.) I inhale deeply. I brace myself. RRRIIIIPPP!!!!

I’m blind! Blind from the pain! Vision returning. Oh crap. I’ve managed to pull off half an inch of the strip. Another deep breath. And RIIIP! Everything is swirly and tie-dyed? Do I hear crashing drums? OK, coming back to normal again. I want to see my trophy – my wax covered pelt that caused me so much agony. I want to revel in the glory that is my triumph over body hair. I hold the wax strip like an Olympic gold medalist.

But why is there no hair on it? Why is the wax mostly gone? Where could the wax go, if not on the strip? Slowly, I eased my head down, my foot still perched on the toilet. I see hair – the hair that should be on the strip. I touch. I feel. I am touching wax. I look to the ceiling and silently shout “nooooooo!!” And realize I have just begun living my own personal version of “The Tar Baby.”

I peel my fingers off the softest, most sensitive part of my body that is now covered in cold wax and matted hair, and make the next big mistake – up until this point, you’ll remember, I’ve had my foot on the toilet. I know I need to move, to do something. So I put my foot down on the floor. And then I hear the slamming of the cell door. Vagina? Sealed shut.

Ass? Sealed shut. A little voice in my head says “I hope you don’t have to potty anytime soon. Your head just might pop off.” I penguin walk around the bathroom trying desperately to figure out what I should do next. Hot water!

Hot water melts wax! I’ll run the hottest water I can stand and get in -the wax should melt and I can gently wipe it away, right? Wrong. I get in the tub – the water is slightly hotter than is used to torture prisoners of war or sterilize surgical equipment. And I sit. Now the only thing worse than having your goodies glued together is having them glued together and then glued to the bottom of a tub. In scalding hot water.

Which, by the way, does not melt the cold wax. So now I’m stuck to the tub. I call my friend, C, because she once dropped out of beauty school so surely she has some secret knowledge or trick to get wax off skin. It’s never good to start a conversation with “So my nether regions are stuck to the tub.” She doesn’t have a trick. She does her best to suppress laughter.

She wants to know exactly where the wax is on the ass – “Are we talking cheek or hole, here?” she asks. She isn’t even trying to hide the giggles now. I give her the run-down of the entire night. She tells me to call the number on the side of the box, but to have a good cover story for where the wax actually is. “You know that if we were working the help line at XX Wax Co. and somebody called with their entire crack sealed shut we’d just put them on hold then record the conversation for everyone we know. You’re going to end up on a radio show or the internet if you tell them the truth.

“While we go through various solutions, I have resorted to scraping the wax off with a razor. Boy, nothing feels better to the girly goodies than covering them in wax, sticking them to a tub in super hot water and THEN dry shaving the sticky wax off!

In the middle of the conversation (which has inexplicably turned to other subjects!) I find the little, beautiful saving grace that is the lotion provided with wax to remove the excess. I rub some in and start screaming “It’s working! It’s working!” I get hearty congratulations from C and we hang up.

I successfully remove all the wax and notice, to my dismay, that the hair is still there. So I shaved the damned stuff off. Hell, I was numb by that point anyway. And then I put the box of wax back in my medicine cabinet. Never know when a moustache might start to come in. Tonight, I attempt hair dying.